skip to main | skip to sidebar

Overloading on caffiene is a bad idea

So I mentioned yesterday that I avoided Cosmos last night & even ate healthy.  It turns out I made one mistake....every time I wanted a Cosmo, I had a Diet Coke.  What I didn't think about was that I'd be up 5 times that night from a caffeine overload.  It made for a early morning workout but I pushed through it & am destined to sleep good tonight!

In my quiet time this morning after my workout a close family friend who recently passed away came to mind.  He was 17 & died from Cystic Fibrosis.  He lived life to the fullest & fought to have every last breath.  I have this photo of him at the lake last summer, arms in the air, on the back of the wave runner, as if to say "I did it!" It was the same summer he learned to waterski.  It has me thinking about the feeling that comes from striving for something so hard & finally earning the reward.  The feeling that our community will have when we find a CURE for cancer, the feeling that those who have been struggling as co survivors will feel to know that others wont go through the same struggles, and even the feeling I'll have when I reach my pink goal.  That feeling that forces you to throw your arms in the air & shout for joy uncontrollably...that feeling when you know the purest sense of joy.  Just 4 days into training & I can already start to feel it.  I'm beginning to think that the journey to get to my pink goal is joy in itself
Posted by Michelle at 10:05 PM 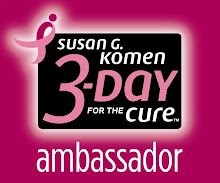 My Pink Goal is everywhere!

Michelle
We're a modern family juggling our lives cross country from the East Coast to the Midwest. We're living what we call Hyphenated Lives by blending our big city urban experiences into America's biggest small town